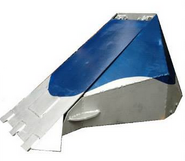 The Battle begins with TX-109 attacking Leveller 2 MK4 with Manta following the two. Manta swiftly get underneath TX-109 a chucks it out of the arena, Leveller 2 is tipped over in the

process. Leveller 2 tries to flip Manta and fails, Manta gets underneath and charges towards the arena side wall and flips Leveller 2 out of the arena. it was over in 0:17 seconds.

Community content is available under CC-BY-SA unless otherwise noted.
Advertisement